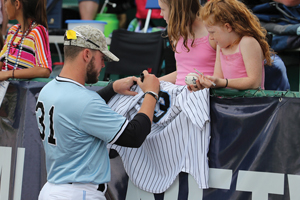 For 65 years now, the Grand Junction Baseball Committee has been persistently working to make the junior college Division I World Series, or JUCO, the Western Slope legend it’s become. Teams, visitors and locals alike treasure this beloved springtime institution, in which ten teams come together to play in an eight-day tournament in front of more than 125,000 fans.

The list of construction projects over the past couple decades, to keep the field in tip-top shape, can be described as consecutive home runs. “Construction projects were spearheaded by Grand Junction Baseball Committee though our dollars, requested grants, and community business skin in the game,” says chairman Jamie Hamilton. “And we’ve had impressive collaborative partnerships with Colorado Mesa University, City of Grand Junction and School District 51.”

Those improvements include scoreboard replacement, video board placement, west side stands and press box, original field turf placement and track re-pavement. There was the $8.3 million 2010 tower construction and the 2022 stadium remodel. Batting cages and clubhouse construction, dugouts, infield replacement and many more upgrades and additions round out their list of projects. “All in, we’ve done over $15 million in improvements,” says Jamie. He adds that an additional $300,000 is committed through 2045.

“Tradition, history, and legacy is why all of us continue this mission. This is a community-owned event and all volunteers and local fans make sure the student athletes and visiting fans have opportunities to create the best memories possible,” says Jamie. “The best thing is that all fans are empowered to make this happen no matter who gets the credit. All the people involved have produced not only a great event, but a multi-use facility over the years that would have cost $100 million dollars to build from the ground up.”

Not only have the improvements been collaborative, but so has the entire organization. Jamie is proud to lead an effort that has such sense of ownership by the entire community.

“Alpine Bank stepped up to give JUCO the credibility to establish base funding to grow the tournament,” says Jamie. “At Alpine’s urging at the onset, part of their sponsorship was directed to scholarships for CMU at the four local high schools. That has led to over $100,000 in scholarships to local students over the last 20 years; pretty unbelievable when we didn’t even have an event one year due to COVID.”